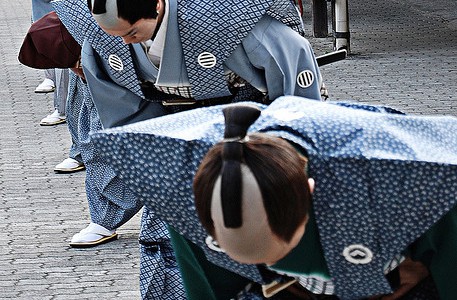 We, Japanese, bow even when we give a little greeting such as “Thank you” or “Goodbye” to people.

Yes, that’s just normal for us Japanese, even though it might look weird to foreign people to see us bowing so many times unnaturally. What’s more?  “bowing on the phone”

Yes, this is one of the scenes that can be seen in Japan.  We bow when we thank or apologize to person who we talk to on the phone.

It might be strange and even non-sense but it’s just normal to us, since we are used to seeing such a scene.

Actually I always think it non-sense to bow to person who I can’t see, but my head goes down naturally.

Now, let me talk more details about the roots of Japanese bowing.

The same action of Japanese bowing is shaking hands overseas.

Shaking hands means showing that you are not the enemy to the person you shake hands with.  Japanese bowing has exactly the same meaning as this: “I’m not your enemy” or “I pay respect”.

Then why does the bowing represent such actions: “I’m not your enemy” or “I pay respect”?

A long ago in Japan, when people usually carry Nihon-tou (Japanese sword), they all primarily guarded their necks in the battle, since they will die if their necks were cut off. I often hear that in England, they rarely bow and the only time they bow is when they see the queen.

But I also hear that foreign people sometimes infectiously bow if we bow to them.